Based at Palmerston North in the North Island of New Zealand, Hireways is a well-established plant hire company owned by the Hart family, as is their machinery sales company NZAM Machinery. Back in 2005 they imported a couple of used Hydrema 912 all-terrain dump trucks from the UK. Although they were in good condition, the investment was a bit of a gamble, as they were an unknown quantity in the local muck-shifting community.

The 10-tonne capacity pair were put straight into their hire fleet and within a few days had left the yard and were working on local sites. In fact local contractors soon came to rely upon these compact two-axle dump trucks that could go anywhere and the only time the Hireways team saw them back in the yard was for a spot of routine maintenance.

Hireways’ operations manager, Jim Nichols, soon had an issue on his hands: not as far as the hire operation was concerned, but wearing his other hat as head salesman for NZAM, as he had a steady flow of users all looking to buy either or both machines.

Within a year the original pair had been sold and replacements, in the form of 912Cs were sourced from the UK and Israel. Over the next few months, half-a-dozen of these models were added to the fleet, and some were immediately sold on.

Although they came with fairly hefty price tags, local contractors believed that they were the best machines on the market at the time, and some classed them as good value for money when their performance was used to the full.

When the 912D was launched Hireways soon had an order in for their first pair, but they were snapped-up straight away and a further four machines were purchased. Two of this original batch are still in their hire fleet and have delivered sterling performance over thousands of hours. More and more 912Ds were added to the fleet over the years and currently there are 14 units out on hire, including seven to one client on a major site at Wainuiomata near Wellington.

With a product line that their customers loved it was time to look at Hydrema’s larger models, in the form of three-axle 922C and D Series, which offered double the payload of the 912 models. They are powered by a 6.7-litre Cummins QSB engine, which provides more than sufficient grunt to power them fully loaded over rough terrain. There are currently three of them in the fleet, the third model arriving on the day of our visit. 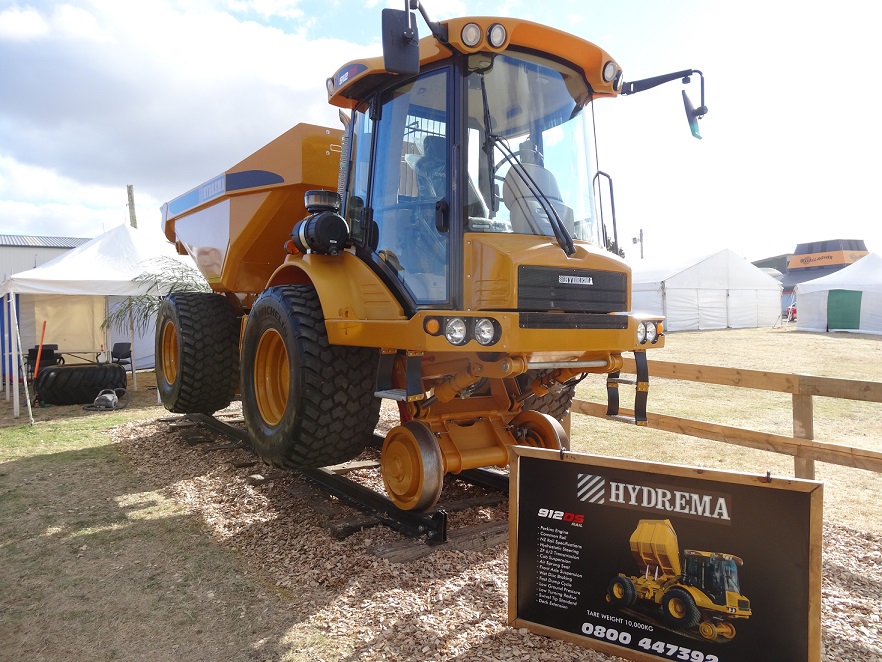 Hireways are, of course, not the only player in the market and a few years ago a rival New Zealand firm locally adapted a couple of 912s for use as road-rail dumpers.

Prompted by this development, and recognising the long-term demand for such machinery that met all the modern rail regulations, Hireways began to explore the opportunities.

The problem is that New Zealand works on a narrow 3ft 6in rail gauge, whereas most of the world uses the much wider standard railway gauge. It therefore was not a simple case of sourcing suitable machines off the shelf from Europe.

Not deterred by this hurdle, Hireways placed an order on Hydrema for a pair of 912DS machines, complete with specialist rail undercarriages that could be adapted to run on narrow gauge rails. They arrived in May 2012 and plans were immediately submitted to the local rail authorities to approve the conversion. However, the cogs of any health & safety bureaucracy turn slowly and it was quite a while before the go-ahead to start work was given.

The engineering work was entrusted to Zane Nichols in the Hireways workshop, in between his other jobs. One major task was to machine off 180mm from either side of the main bar axles, then reconfigure the rubber traction drive system from the rear tyres.

The first conversion made its debut test run on a private rail siding in April 2013.

The rail bogies were hydraulically lowered and the unique 912DS lifted itself up from the rails. A run along the rails and back demonstrated that the drive mechanism was working. 10 tonnes of material was then loaded into the swivel skip and brake tests were undertaken and passed. After a few more tipping and running cycles everything looked in good order.

Since then a number of modifications have been made to the machine in order that it complies fully with the latest generation of New Zealand Rail regulations. As we go to press, Hireways is awaiting the final certification to enable their new road-railer to be put into service. Once this arrives, Jim predicts a rash of orders from specialised contractors.

At the moment, Hireways has the largest fleet of Hydrema machines in New Zealand. If the economy continues to grow at the current pace, I would expect to see a lot more in the future.